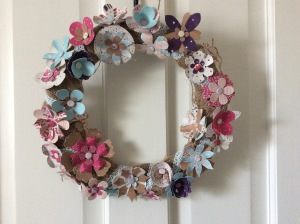 I love how this was made from bits and pieces…

The cardboard box was cut into a ring doughnut shape using a craft knife around a dinner and side plate as templates. Honestly, the finished piece looks as good as a bought polystyrene ring would.

The ring was then wrapped with strips of burlap to give a bit of dimension and cover the card. Any plain fabric, canvas or even paper would do. I then wrapped lace effect cord on top of the burlap at about 10 centimeter spacing with about 20 cm spare at the end, which I pinned through the burlap to create a hanger.

You could use a longer loop for hanging if you wanted your cord to show and garden string looks good on burlap if you don’t have a long enough piece of cord. If you tie shorter pieces of string together, glue your decorations over the knots.

Pre cut, die cut flowers from a craftwork cards beau paper kit were stuck on with hot glue and supplemented with flowers cut on the scan n cut from the same paper pack.  I found putting the flowers on the inner and outer of the ring face added more dimension.

l added  ‘candi’ to the flower centre as a bit of detail,  but the waste from the office hole punch would work, as would beads or buttons if you like more frill effects.

When you feel it looks full enough, hang it up to check from every angle and fill in the gaps, as fuller is better to plump up the paper.

The beauty if this is that the theme and colours could change according to the paper you have –  from a glittery festive to a ‘natural’ palette.